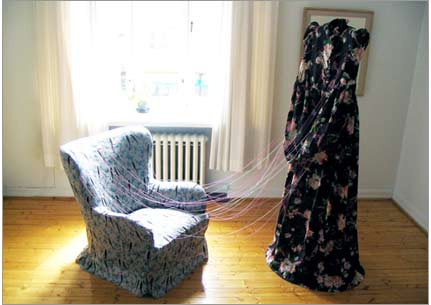 Presented at the Spring Show of Vienna International Apartment entitled “Voyage in Place”.

The work is mainly influenced by the “nature” of the Vienna International Apartment* as exhibiting space and the point of reference is the period and style of the actual building’s architecture in which the apartment is located.

The work is placed in the bedroom of the apartment and it is an installation composed by an armchair and a dress in a condition of a dialogue. A possible conversation that could have taken place some 100 (?) years ago in the same place in which the work is now presented.

The armchair’s cover is done in the same way that armchair’s covers were executed and produced in the late 1890´s and early 1910´s; the period in which the “imaginary” situation of the work is referred to.

The installation aims to offer an abnormal presence in front of the spectators of the show as if it was coming from the past, like a “flash” in time (Voyage in Place/Space/Time).