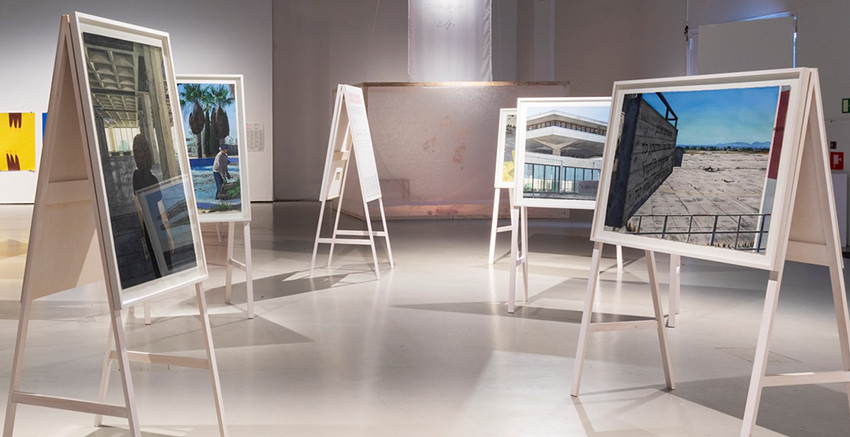 A series of 11 paintings through which I claim a piece of personal memory from the abandoned east wing of Athens International Airport in Ellinikó, located 500 meters away from my parent´s house.
Parts of my personal life subjectively projected on selected areas of the airport, designed by Eero Saarinen in 1963 and built in 1968.

The Tromocratisch incest, the political parties, the reflection of Ymmitos on the glass through my figure, 2020.
Watercolours and pencil on paper. 105 x 75 cm.

Ingeborg Beugel is a Dutch television program maker, writer, journalist and former correspondent in the Balkans, based in Athens, Greece.

She was arrested on the Greek island of Hydra on June 13 2021 for providing shelter to an Afghan asylum seeker. The asylum seeker was also arrested. They were both released a day later. Beugel has to appear in court in October. She faces a fine of 10,500 euros or a year in prison, NU.nl reports.
The 61-year-old journalist was arrested based on a 1991 law that forbids providing aid and shelter to undocumented migrants. As far as is known, this law has never been used in Greece, her lawyer said to the newspaper. It is also in conflict with European law.

Over the past years, Beugel often reported on the inhumane situation asylum seekers face in Greece, publishing in De Groene Amsterdammer and BNNVARA. During one of her stories in 2018, she met the then 21-year-old Afghan asylum seeker Fridoon and his dog in camp Malakasa. He told her that his father and uncle were killed by the Taliban and his brother was mutilated. He assisted Beugel as translator.
After Fridoon and his dog were severely assaulted by other camp residents, the Dutch journalist took him in and wrote about him in De Groene Amsterdammer. "I was impressed by his language skills and his gentle personality, and decided to take him under my mother wings," Beugel said to NU.nl.

The book entitled please mamma, tell me you’re sorry, is a fictive project related and dedicated to all those, whose mothers have suffered from narcissistic personality disorder.

The placemats currying the logo of Air Zaïre were found in the neighborhood around the airport between 1985 and 1988.

The garden of Jacques Rancière, the abandoned fountain in front of the departures building, 2020.
Watercolours and pencil on paper. 105 x 75 cm.

Katerina Gogou, the isolation of the airport’s watchtower, the view to the Saronic Gulf, 2020.
Watercolours and pencil on paper. 75 x 105 cm.

Katerina Gogou (1 June 1940 – 3 October 1993) was a poetess, author and actress. She appeared in over thirty Greek films and was well-known for her overall artistic contribution to the Greek arts.

The excerpt of her poem sprayed on the wall of the watchtower around the airport is a reference to the eternally unsolved problem of the Greek Communist Party’s development.

The uncle-member of the Organization X, the building of Eero Saarinen, the milky light of Attica skyline, 2020. Watercolours and pencil on paper. 75 x 105 cm.

The Organization X ("Chi" in Greek and members as ”Chites”) was a right-wing militant resistance organization set up in 1941 during the Axis occupation of Greece. Initially an anti-Axis resistance organization it gradually shifted its focus towards anti-communism, collaborating with the Axis authorities against EAM and its affiliates. Following the end of the Axis occupation, it played an active role in the persecution of communist sympathizers during the White Terror and various military operations of the Greek Civil War, most notably the December Events that took place in December 1944 that eventually led to the outbreak of the Greek Civil War.

EAM (Greek: Ethnikó Apeleftherotikó Métopo – EAM, English: The National Liberation Front) was the main movement of the Greek Resistance during the Axis occupation of Greece. Its main driving force was the Communist Party of Greece (KKE), but its membership throughout the occupation included several other leftist and republican groups. ??? became the first true mass social movement in modern Greek history.

Eero Saarinen (August 20, 1910 – September 1, 1961) was a Finnish-American architect and industrial designer. Saarinen is best known for designing the Washington Dulles International Airport outside Washington, D.C., the TWA Flight Center in New York City, the Gateway Arch in St. Louis. Between 1960 and 1969 he designed the east terminal building of the old International Airport of Athens, which operated until 2001.

Magda Fyssa is the mother of Pavlos Fyssas.

Palvos Fyssas, also known by his stage name Killah P (meaning "Killer of the Past"), was a Greek musician and rapper, notable for his participation and performance in musical projects, as well as for his anti-fascist activism. He toured well-known venues in Athens and throughout Greece.
He was murdered on 18 September 2013 by a member of the Neo-Nazi criminal organization (previously recognized as a national political party) Golden Dawn, Giorgos Roupakias.

The Popular Association – Golden Dawn, usually known as Golden Dawn, is (was?) a far-right ultranationalist political party in Greece. In November 2020 the party’s general secretary and several members of parliament have been found guilty of leading a criminal organization, with a number of other leading members convicted of participation.

Alain Badiou (born 17 January 1937) is a French philosopher, formerly chair of Philosophy at the École normale supérieure (ENS) and founder of the faculty of Philosophy of the Université Paris VIII with Gilles Deleuze, Michel Foucault and Jean-François Lyotard.
Badiou has written about the concepts of being, truth, event and the subject in a way that, he claims, is neither postmodern nor simply a repetition of modernity. He argues for a return of communism as a political force.

Prodromos, the gigolo uncle, the bed sheet, the prohibitions, 2020.
Watercolours and pencil on paper. 75 x 105 cm.

Prodromos Emmanouilidis is a visual artist from Athens, Greece.

In Greece, a few years back, it was believed that women should remain pure and untouched before getting married. Tradition said that the day after the first night of the wedding, the new wife should prove that she was pure by hanging the bed sheets on the balcony for the whole world to see.

The red Moskvitch of my father, the arrivals building, 2021.
Watercolours and pencil on paper. 75 x 105 cm.

Moskvitch (also written as Moskvich, Moskvi? or Moskwitsch) was a Soviet/Russian automobile brand produced by AZLK from 1946 to 1991 and by OAO Moskvitch from 1991 to 2001. OAO Moskvitch was a privatized venture name given to the former factory in order to avoid legal issues after the dissolution of the Soviet Union in 1991. Since the factory had no assembly branches outside Russia after 1991, its name is largely used today to refer to the building located in the lower eastern part of Moscow and abandoned since 2006.

An old photograph of my grandmother projected on the wall of the control panel room situated between the arrivals and departures buildings of the airport.

Ioanna Kourtovik is a lawyer from Greece.
She is well known for her work and support on human rights.